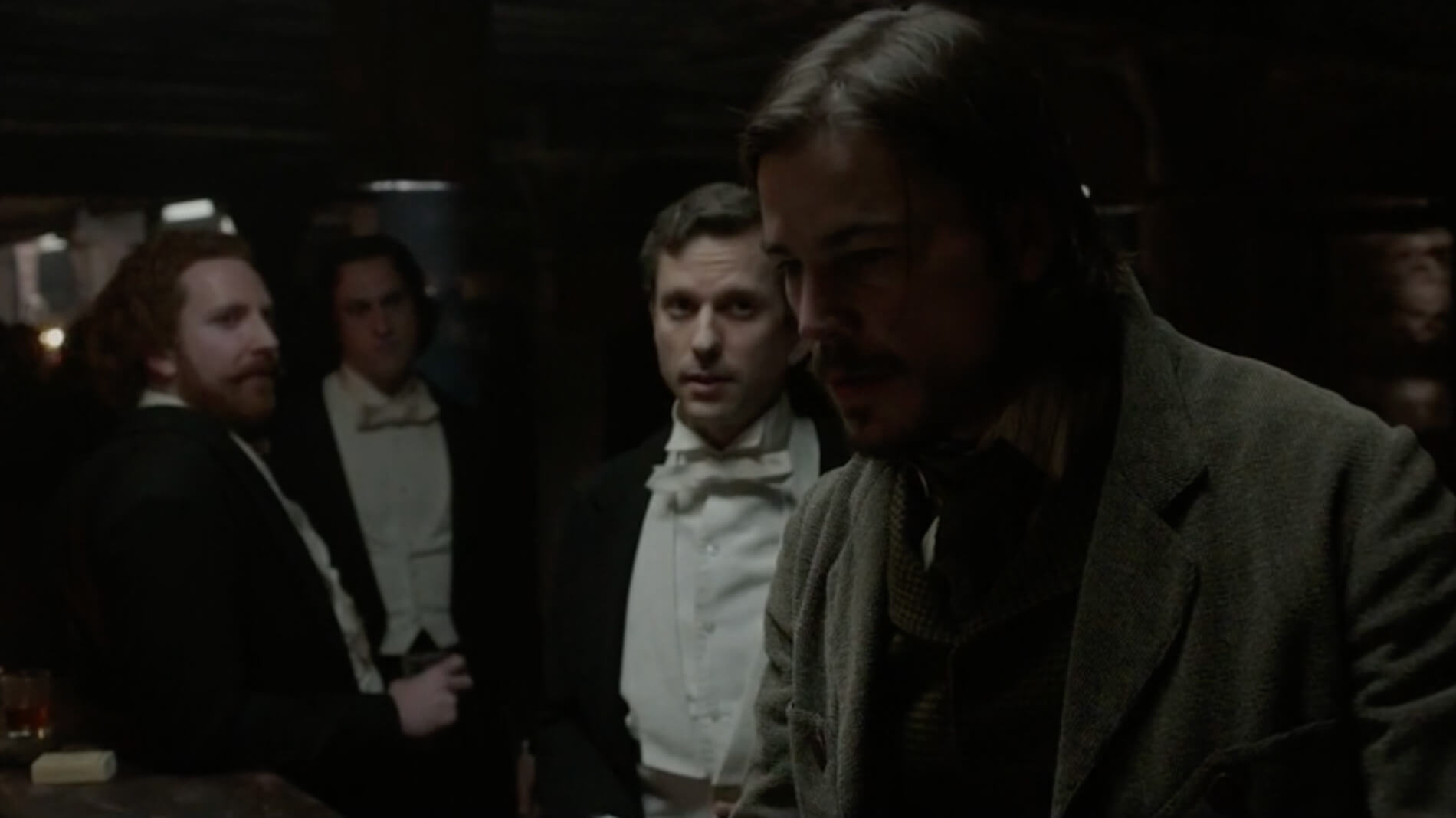 I was sitting opposite Josh Hartnett, the fight co-ordinator was discussing the set up with the director, and the dialect coach was giving me a note on my lines. I was completely at ease, about to shoot a scene for Penny Dreadful.

At the time, it was probably the biggest set I had been on, the biggest star I had performed opposite, and I felt completely at home.

If you’re a fan of the show you will surely remember my Oscar deserving 1.8 seconds of screen time in episode 4 of season 1—see the picture of me picking a fight with Josh Hartnett to jog your memory. Don’t worry though, I let the stuntman do the actual fighting. Josh Hartnett is a big guy 😂

Anyway, apart from name dropping to make myself sound cool, I wanted to point out that I have been on-set with a couple of big names (even if it was only for a moment of screentime), I have played lead and supporting roles in indie features, and I’ve been in a load of short films.

When I’m on-set, I’m in my element. I love being a screen actor.

But when it came to shooting video for our business? I did not want to do it. I resisted it, I hated doing it, I was uncomfortable, I didn’t like what we shot, I didn’t want to put it online.

So I know how you feel.

Even as an actor, with a lot of experience on camera, video for your business is hard.

The thing is, it is SO valuable it is worth pushing through. I’ll be honest, I’m not a big fan of the whole “FEEL THE FEAR AND DO IT ANYWAY” brigade. I”m more of a “feel the fear and realise it’s your body’s way of telling you this is something you’re not ready for” person.

But then when it comes to video I end up becoming one of those “get outside your comfort zone” types. Look, I’m sure you’ve heard all the stats:

The stats go on and on in favour of video, but numbers schmumbers, if you want to attract your dream customers to your business, it’s important they get to know you.

And video really allows people to get to know you.

Which is also why it’s so scary right? Because when people get to know us, they get to judge us. And there are some pretty judgy people on the internet.

Let me go back to my acting experience for a minute, any really good acting training will teach you that you have to leave your ego at the door. Because if you are worried about being judged you will not be free enough to take the chances required to craft a really good performance.

It’s the same deal here, you can’t worry about the judgy people. Because if they don’t love you and what you have to offer, they are not your dream customers. Simple as that.

Make great content for your dream customers. Create content of value for them. They will love getting to know you, they will love what you have to offer and they will purchase from you. And they are the only people we are creating content for.

But what if my video is bad?

So what? Make the next one a little bit better. Don’t chase perfection. In fact perfection could easily work against you, people want to get to know you and video shot on your phone is personal, video that shows you in your natural environment is personal. It’s immediate and real—it reflects what someone would get if they video called you on your smartphone, and that’s what you want.

High production value video has its place. You might want a glossy video for an ad, or for an introductory video on your website.

But on social media it’s good to have your content look like native content—in other words, there should be no noticeable difference between the quality of my sister’s video of herself roller skating for the first time in years, and the video of you giving me a handy tip related to your business.

Should you get to know some basics of lighting and framing and eyelines? Sure! But don’t obsess over them.

YouTube has loads of free tutorials on getting the basics of video right (here’s a good one). Get some natural light on your face, keep any major light source in front of you so you’re not a silhouette, and try not to have anything completely unprofessional behind you.

Don’t be like me and publish a video that had a tube of toothpaste in the frame, because I forgot to put it away after doing the shopping.

Or you know, be just like me, because nobody complained about the toothpaste, they just enjoyed the content.

The most important thing is to just dive in and start making videos. Don’t procrastinate like we did. We dragged our feet for almost two years, making excuse after excuse. We went to workshops and watched how-to videos, and we talked endlessly about how we needed to get started with video.

When we finally started, I hated it. So did Marci. We hated the process. We hated the results. But we published the videos anyway. They really weren’t great. Our videos still aren’t great 😁.

But I can tell you that we are attracting our dream clients. Nobody comments on the poor quality of our videos, but we get plenty of positive feedback about the content of our videos.